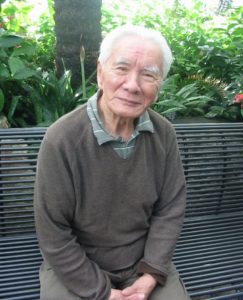 saddened to learn of the passing of professor emeritus, Jerome Ch’en. Professor Ch’en passed away on June 17, in St. Catharines, Ontario.

A professor in York’s Department of History from 1971 to 1987, Ch’en also served as the director of the University of Toronto-York University Joint Centre on Modern East Asia from 1983 to 1985. His work earned him numerous honours, including becoming a Fellow of the Royal Society of Canada in 1981, before being named a Distinguished Research Professor at York in 1984.

Professor Ch’en’s contributions to York also extended to the Libraries, as the Jerome Ch’en fonds are housed in the Clara Thomas Archives and Special Collections. The fonds consist of Professor Ch’en’s collection of statements from delegates to the Geneva Conference of 1954, along with newspaper clippings and related material concerning the Korean War.

In addition to the materials located in the Clara Thomas Archives, items from Professor Ch’en’s personal collection help make up part of YUL’s East Asian Studies Collection, with many of his resources available on shelves throughout the Libraries.

Professor Ch’en’s scholarly work in Chinese history resulted in many publications, including The military-gentry coalition: China under the warlords (1979) and The Highlanders of Central China: A History, 1895-1937 (1992). His work Mao and the Chinese Revolution (1965) was translated into several languages. Ch’en also edited collections, provided several articles for journals and conference proceedings, and translated the works of other scholars.

Born in Chengdu, Sichuan, China, in 1919, Ch’en studied at Tianjin Nankai University, National Southwestern Associated University in Kunming. He later attended the London School of Economics, and in the 1950s Ch’en worked for the Chinese Service of the British Broadcasting Corporation. He also taught history at the University of Leeds prior to moving to Canada. He retired from York in 1987.