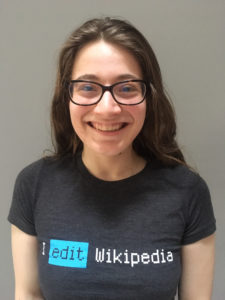 Hannah Feldbloom has made over 40,000 edits to Wikipedia, something she credits in part to getting involved in Wikipedia Edit-a-Thons held by York University Libraries

With over 40,000 edits in Wikipedia, Hannah Feldbloom, a third-year criminology student at York University, is an expert in improving and safeguarding the online encyclopedia’s authoritativeness and reliability.

Three years ago, Feldbloom stepped into Steacie Library during the Ada Lovelace Day Edit-a-thon, an annual event dedicated to creating, expanding, and improving Wikipedia entries for women in STEM, and she’s been helping to make the world’s most popular encyclopedia a better resource ever since.

“I edit Wikipedia because I love being able to spread knowledge,” said Feldbloom. “It isn’t self-serving, what I contribute doesn’t just affect me but can impact someone I do not even know.”

Feldbloom’s most recent editing work came during the York University Libraries’ International Women’s Day Edit-a-Thon on March 8. Over the course of the day, Feldbloom and other participants made over one thousand edits, even creating seven articles of notable Canadian women including Education Professor Susan Dion, History Professor Varpu Lindström, and Seneca’s Chief Librarian and feminist Sherrill Cheda.

According to the Women in Red WikiProject only around 18% of all biographies on the site are about women. The group, whose name refers to Wikipedia’s coloured links that indicate a page does not yet exist, has set out to address that imbalance, with volunteers from around the world contributing to their goal at events like edit-a-thons.

Along with helping to combat the content gender gap, the event serves another purpose, as it increases the reliability of the information on Wikipedia. Many students begin their research on Wikipedia, and events like the Edit-a-Thon show students how to not only be critical of the information they find online but also that they can be active consumers and contributors.

“I feel edit-a-thons provide students with a unique learning experience where they can put their information literacy skills into practice,” said Amy Poon, Digital Publishing Librarian and Edit-a-thon co-organizer. “For example, by doing iterative searching and evaluating sources to determine if they are credible before adding them to Wikipedia. It also helps them to realize that creating information is a process and that they can contribute back to a community.”

The event also demonstrates to students that everything is not online. Surfacing the stories of women in Wikipedia faces many obstacles including the need to access material, including digitized national and community newspapers, that are blocked by paywalls.

By building, and distribute knowledge from these sources, the university community can distribute knowledge that is inaccessible to many. For example, during the Edit-a-Thon, an article for Ruth Dworin was created using information compiled from paywalled material accessible thanks to subscriptions through York University Libraries and even material on file at the Clara Thomas Archives and Special Collections.

While editing Wikipedia can be made from the comfort of one’s home, an edit-a-thon is an opportunity to editors of all experience levels to motivate and learn from one another. “These edit-a-thons really helped me feel connected to the Wikipedia community and were very enjoyable,” said Feldboom.